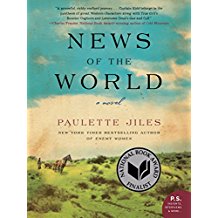 Book Title: The News of the World

In the aftermath of the American Civil War, an aging itinerant news reader agrees to transport a young captive of the Kiowa back to her people in this morally complex, multi-layered novel of historical fiction from the author of “Enemy Women” that explores the boundaries of family, responsibility, honor, and trust.

Captain Jefferson Kyle Kidd travels through northern Texas, giving live readings from newspapers to paying audiences hungry for news of the world. An elderly widower who has lived through three wars and fought in two of them, the captain enjoys his rootless, solitary existence.

In Wichita Falls, he is offered a $50 gold piece to deliver a young orphan to her relatives in San Antonio. Four years earlier, a band of Kiowa raiders killed Johanna’s parents and sister; sparing the little girl, they raised her as one of their own. Recently rescued by the U.S. army, the ten-year-old has once again been torn away from the only home she knows.

Their 400-mile journey south through unsettled territory and unforgiving terrain proves difficult and at times dangerous. Johanna has forgotten the English language, tries to escape at every opportunity, throws away her shoes, and refuses to act “civilized.” Yet as the miles pass, the two lonely survivors tentatively begin to trust each other, forming a bond that marks the difference between life and death in this treacherous land.

Arriving in San Antonio, the reunion is neither happy nor welcome. The captain must hand Johanna over to an aunt and uncle she does not remember—strangers who regard her as an unwanted burden. A respectable man, Captain Kidd is faced with a terrible choice: abandon the girl to her fate or become—in the eyes of the law—a kidnapper himself.

Normally I love historical fiction and especially based on or around the Civil War. But westerns, as a genre, I run away from. With the first 40 or so pages of News of the World, laden with a western feel and beholden with cowboys and Indians, I became deeply concerned with my reading selection on the heels of my dislike of Lincoln in the Bardo. But I soldiered on and was pleasantly surprised that I ended up actually enjoying this novel.

Captain Kidd is definitely a one-of-a kind character, and someone I never met before in any novel I’ve previously read. I never knew that there were people who made a living reading the news and getting paid for it. Our captain is also quite unique in that he is on the older side of retirement age, and basically tasked with a very out-of-the-ordinary role of bringing a young girl back to her family.

Johanna was taken at a tender age by the Kiowa Indians and over the years became totally immersed in the culture, language, and religion to the point where she would always have issue with western society. It takes time for Johanna to leave behind the words and customs that were her life for the past several informative years. Thankfully Captain Kidd is patient, even when one would wonder how.

For me, the novel and plot took off at the juncture where the duo battle against some unethical individuals. As their travels progress and they get closer to their final goal and destination, their bond grows stronger and stronger. They each fill a void in the other…unlikely on the surface, but they do.

The ending was exactly as one would expect and satisfyingly tied up in a nice big bow. I’m glad that I gave this novel a chance and read to the end.