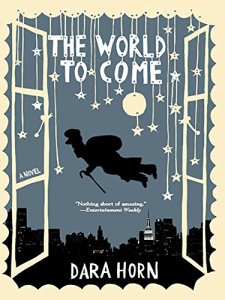 A million-dollar Chagall is stolen from a museum during a singles’ cocktail hour. The unlikely thief, former child prodigy Benjamin Ziskind, is convinced that the painting once hung in his parents’ living room. This work of art opens a door through which we discover his family’s startling history–from an orphanage in Soviet Russia where Chagall taught to suburban New Jersey and the jungles of Vietnam.

With the last three Thursday #TBT posts, I reviewed book one, book two and book three of my 48-Hour Reading Challenge in 2007. Today, I’m coasting into book four.

I surprisingly enjoyed this book despite my friend Stephanie saying she didn’t. It is about a recently divorced man named Ben Zizkind who writes questions for a quiz show. At the prompting of his twin sister, he goes to a singles party at a Jewish museum, and lo and behold, he sees a painting that used to hang in his parents’ home…a small Chagall.

After everyone leaves to go to another part of the museum for the musical entertainment, he stays behind (he can’t hear music as according to Jewish law he is forbidden within the year following a parent’s death and his mom recently died). Something comes over Ben and he steals the painting!

Now you might think that alarms go off and the video camera would capture the theft. Wrong! Security is focused on preventing terrorists from harming the people inside. So needless to say, Ben gets away with the theft until the very attractive museum director puts two and two together.

The rest of the book tells the story of Ben’s ancestry and how the painting came into the family (it truly is a Chagall). I have a penchant for novels that jump around in time, and are also narrated from different perspectives. There is also a bit of history, art, poetry, short stories, and lots of talk about what happens after death.

According to Rosalie (Ben’s mom who is a children’s writer…albeit a very dark children’s writer if you ask me), she doesn’t believe in reincarnation. What she believes is that there is a world to come (hence the title) where people have passed teach and guide the future generation when they are in the womb. Definitely an enjoyable read…one that could be enjoyed by men (back in 2007 it was described as chick lit).