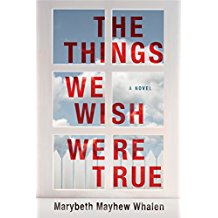 Book Title:  The Things We Wish Were True

In an idyllic small-town neighborhood, a near tragedy triggers a series of dark revelations.

From the outside, Sycamore Glen, North Carolina, might look like the perfect all-American neighborhood. But behind the white picket fences lies a web of secrets that reach from house to house.

Up and down the streets, neighbors quietly bear the weight of their own pasts—until an accident at the community pool upsets the delicate equilibrium. And when tragic circumstances compel a woman to return to Sycamore Glen after years of self-imposed banishment, the tangle of the neighbors’ intertwined lives begins to unravel.

During the course of a sweltering summer, long-buried secrets are revealed, and the neighbors learn that it’s impossible to really know those closest to us. But is it impossible to love and forgive them?

At the onset, there were quite a number of times set that I almost abandoned this book. Normally I really enjoy multiple narrators and characters telling the story, chapter by chapter. However, it was hard to follow the first couple of chapters and keep up with the storyline. The narrators range in age from pre-teen to mid-50s and everything in between as well as male and female. Additionally the very strange names were off-putting—Jencey, Bryte, Zell, Cailey to name a few. What is still perplexing to me is the reason behind just Cailey, the youngest character, having her version of events told in the first person. I still haven’t quite figured out the reason why.

That’s the negative. There are some positives, which made me change from my original thought of a 1- to 2-star rating to 3-star rating. During the course of the entire novel, which spans from Memorial Day to just when school starts, each of the characters experiences an awakening of sorts. They come to terms with the past and secrets that they bury and move on—each in their own individual way. I really enjoyed how the author makes it happen for each person and in the process tackles very tough issues, from infertility to child abduction to an unexpected hospitalization to white-collar crime.

The other aspect of “The Things We Wish Were True” that made it worth an uptick in star rating was the way the author captures the setting of a small town in the South. The Fourth of July parade was painted with deft strokes along with the potluck buffet fixings and the culminating firework display.

Ultimately I was glad that I gave this selection the chance and read on because it truly was a satisfying read (and I did get over the unusual names…finally.)