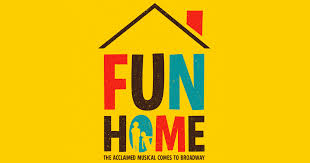 Last night we went to see the second installment in the Broadway series at the Straz in Tampa…”Fun Home.” When it comes to plays, movies and books, I have learned that I prefer to not have my opinion swayed by reviews. I like to go in, watch or read, and decide for myself and formulate my own opinion.

All I knew about “Fun Home” was that it was about a funeral home. I actually did learn late on Friday at work from a coworker that the play was about a woman who  figures out that she is a lesbian and also discovered her dad had been hiding his homosexuality. That’s all I knew. And thankfully before the play started we did learn that there were no intermissions…the play was 99 minutes in length.

Thoughts about the play…well as a musical it did not work for me at all. Obviously the subject was deep and thought provoking, and the songs, singing and dancing distracted from the message. Hubby and I both agreed that “Fun Home” would have worked for us as a straightforward drama. And of course, after the fact, I learned that the play is based on the narrator, Alison Bechdel, and her memoir featuring her cartoons.

What definitely did work was having Alison (actresses playing her) at various ages all on the stage together, which really highlighted her struggle from an early age to late adulthood with her sexuality. Quite honestly we are still trying to figure out how “Fun Home” won a Tony over “Something Rotten,” which was much more a classic musical.