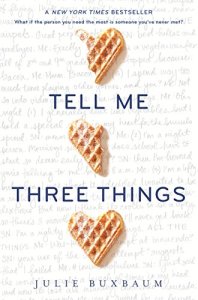 Everything about Jessie is wrong. At least, that’s what it feels like during her first week of junior year at her new ultra-intimidating prep school in Los Angeles. Just when she’s thinking about hightailing it back to Chicago, she gets an email from a person calling themselves Somebody/Nobody (SN for short), offering to help her navigate the wilds of Wood Valley High School. Is it an elaborate hoax? Or can she rely on SN for some much-needed help?

It’s been barely two years since her mother’s death, and because her father eloped with a woman he met online, Jessie has been forced to move across the country to live with her stepmonster and her pretentious teenage son.

In a leap of faith—or an act of complete desperation—Jessie begins to rely on SN, and SN quickly becomes her lifeline and closest ally. Jessie can’t help wanting to meet SN in person. But are some mysteries better left unsolved?

After the death of a loved one, time dutifully marches on. The person left behind—spouse, child or sibling—tries to process the accompanying grief and everyone does it differently. However, for many, the days since the death are often counted. And so for 16-year-old Jessie Holmes, as “Tell Me Three Things” opens in this fictional Young Adult novel, the number is 733 days since her mother died of ovarian cancer.

Even though the book is voiced by a teenager who needs to come to terms with her mother’s death, “Tell Me Three Things” is far from a depressing read. In fact, at the end, many readers will have smiles plastered on their faces (I know that I did).

This novel is Julie Buxbaum’s first to be penned in the Young Adult genre, and yet another fine example of a YA novel that I thoroughly enjoyed this year.  In all actuality, “Tell Me Three Things” reads more like a fine example of contemporary literature, including some modern-day literary trope to move the plot along, i.e. emails and IMs.

What made Buxbaum change course and veer away from her usual wheelhouse of adult fiction? It was time to sit down and explore feelings that she had kept bottled up for more than 24 years. Like Jessie, Buxbaum lost her mother at the same age, and she also counted days, which has since morphed into counting the years. I know that I can relate to the counting of the years and anniversaries when it comes to my father, and grandparents too.

At the end of the novel, Buxbaum shared a note to readers. According to the former lawyer and graduate of Harvard Law School, she wanted to explore what it was like to lose a parent as a teenager—at that crucial period in time that is already difficult. Buxbaum did not want to write a depressing book so she wove in a theme that is much more uplifting…first love.

Contrary to what many would assume, Jessie Holmes is NOT Julie Buxbaum. “Jessie is not me—she’s so much cooler and more together than I ever was at sixteen, or even am now…But she’s a version of me, an alterna-me…” Driving both the imagined version of the author and Jessie is the supreme desire to be seen and understood, which leads to the creation of a perfect foil, the mysterious Somebody Nobody or SN.

Relocation to the West Coast

After two years, Jessie’s father unexpectedly remarries and moves the two to Los Angeles, which is light-years away from where our heroine grew up in Chicago. Enter SN, who helps Jessie navigate the landscape of the foreign land of not only a new school, but a new private school to boot.

As we walk with Jessie through the first-person account of her early days in the City of Angels, the reader is introduced to a number of supporting characters: a new sibling, her step-brother; classic high school mean girls; a dark brooding loner and potential new best friends.

Thankfully, she has SN to help her sidestep the inevitable booby traps and angst of high school. But there is a bond that ties Jessie and secret admirer SN: he has also lost a loved one, a sibling. There are days when life gets overwhelming for Jessie, and they become what she describes as really bad days. “My eyes fill with tears, though I fight them. I’m not sure why I feel like crying. Suddenly, everything feels irrevocably broken in that way it can in the middle of the night when you are alone. In that way it can when you are watching your father comfort his new wife. In that way it can when you too are hurting but there’s no one there to comfort you.”

Until SN enters her life, Jessie has kept her emotions and grief in check. What she shares is relatable for young and old alike. “But I still haven’t found the words to talk about my mom. The real her. To remember who she was in a way that doesn’t make me keel over.”

“Tell Me Three Things” teaches some valuable lessons about life, death and love. The reader witnesses Jessie’s coming of age as she realizes that even though her mom has died, her essence still lives on. Her mom loved her unconditionally, which she will always cherish and keep close to her heart. Jessie realizes how fortunate she was that she was “loved in a way that not everyone gets to love their mom. Loved my mom because she was cool and interesting and warm and listened to me and continued to make me pancakes in the shape of my initials because somehow, even though I didn’t, she always understood that I’d never be too old for that sort of thing.”

Like many of us who have lost a loved one, Jessie voices the one regret she has learned to come to terms with in the end, “She will never see who I grew up to be—that great mystery of who I am and who I am meant to be—finally asked and answered.”

Another utterly satisfying read for 2017 and I will definitely check out Buxbaum’s other titles in 2018.