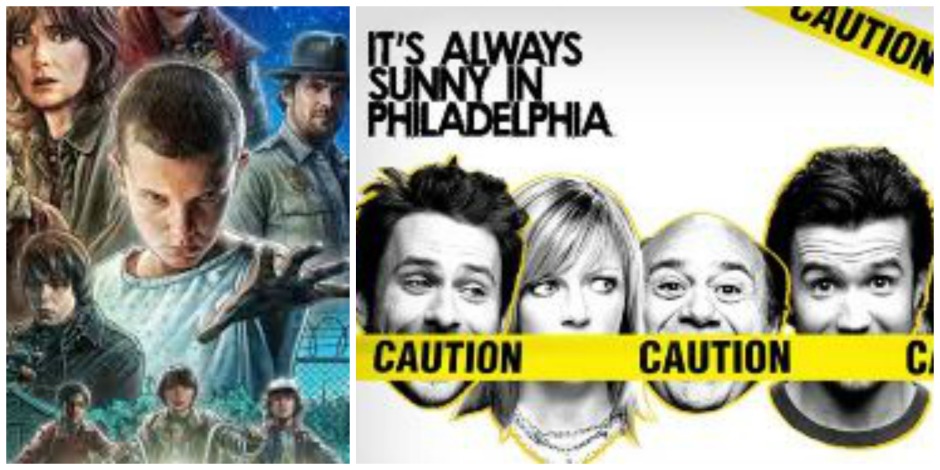 I love to binge and watch TV series. My first binge-worthy series was “Game of Thrones,”  (first season), but there have been many shows that followed. I’ve binged on one of my favorites, “Orphan Black,” but for whatever reason, I stopped watching two years ago and think that it is high time to get caught up. Of course, some of the others–as many discovered before me–were: “Walking Dead,” “Orange is the New Black,” “House of Cards,” “The Affair” and “The Killing.”

However, I recently found two shows that filled my love of mystery and horror, and also quirky comedy: “Stranger Things” and “It’s Always Sunny in Philadelphia.” If you haven’t watched “Stranger Things,” you are missing out on quality writing, acting, character development all set in a nostalgic look into the ’80s. And ‘Always Sunny,’ I find Charlie Day funny though he is not everyone’s cup of tea (like my hubby).

I would describe “Stranger Things” as a show that if “Lost” hitched up with “ET” and “The Sandlot,” the Netflix series would be the creative product. The kids who are the actors in “Stranger Things” make the show…they are all crazy good. And after finishing the series, I read up on each one of them. Equally fascinating was the fact that almost all of them are musically inclined.

Now when it comes to “It’s Always Sunny in Philadelphia,” I am utterly floored that the ‘group’–every single one of them–makes bad decisions. Exponentially bad decisions. The Prophet and I binged over the holiday weekend, and there were many times where we just shook our heads in wonder. Again I needed to read up on the leads as it was interesting that the male trio are all involved in the creation and producing. And lo and behold, I discovered that Mac and Dee, well the actors that play them, are married in real life. A very good giggle…and how can you also go wrong with Danny DeVito. And yeah, there are many seasons with a new one coming this year, 2018.