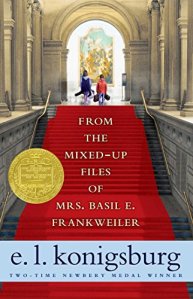 I started this book during the last week of December, but didn’t quite finish for it to be part of last year’s Modern Mrs. Darcy Reading Challenge. It was supposed to be my selection as a Newberry Medal Award Winner.

I definitely wanted to read this classic children’s book again because the story stayed with me…for more years than I want to admit to it being. And believe it or not, I never watched any of the movie adaptations of the book.

Here’s the plot in a nutshell. Greenwich, Connecticut-born and bred Claudia Kincaid feels slighted by her family…well really more accurately her parents. She got the idea in her head that if she ran away from home, and returned fundamentally different, all her troubles would go away. She would feel appreciated and vindicated. But Claudia couldn’t just run away on her own…she needed a monetary nest-egg to make it work. Thus, she enlisted her younger brother, Jamie, to fund the runaway expedition. Jamie as it turns out liked to fleece his friend, Bruce, playing the card game of War. Over the course of time, Claudia’s brother had close to $25, mostly in small coins.

Claudia had a solid plan and it was to run away to a location rather than per se runaway from somewhere. Destination: the Metropolitan Museum of Art in NYC. The siblings actually managed to live, undetected, within the confines of the museum for over a week. They slept in the Renaissance wing, took baths in the fountain (with the bonus of accumulated more coinage that replenished their ‘bank’) and stayed within budget by scrimping on meals and transportation.

The duo’s expedition in the city takes an interesting turn when they realize they are residents at the museum along with a potentially priceless art object. Angel was purchased from a Mrs. Basil E. Frankweiler from Farmington, Connecticut, and quite possibly could be hewn and chiseled by none other than Michelangelo. (I will refrain from spoiling the outcome of that mystery).

Over the years, the story stayed with me as I fantasized about living in a museum. I would have thoroughly loved and enjoyed every minute of running away to the Met…actually any museum. I loved going on field trips there growing up as well as the Museum of Natural History, the Guggenheim and the Metropolitan Museum of Modern Art. For me, the book was still magical…many years later. And I still can’t quite figure out how I never read it or had The Prophet read this classic children’s book when he was growing up.