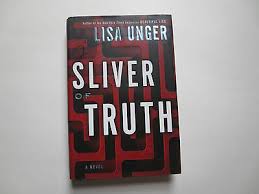 Title: A Sliver of Truth

In “Beautiful Lies,” Ridley Jones stepped off a street corner and into an abyss of violence, deception, and fear. Now, she is just trying to get on with her life when another seemingly mundane act–picking up some prints at a photo lab–sends her on a mission to find a ghost from her past. A figure of the same man appears in too many pictures she’s taken in the last year, lurking just far enough away to make identification impossible. But, she is not the only one who wants to know who the man is, and soon finds herself in the middle of a deeper investigation and unsure who to trust.

The only thing Ridley knows for sure is that she has to get to the truth about herself and her past if she is ever going to find her way home. END_OF_DOCUMENT_TOKEN_TO_BE_REPLACED 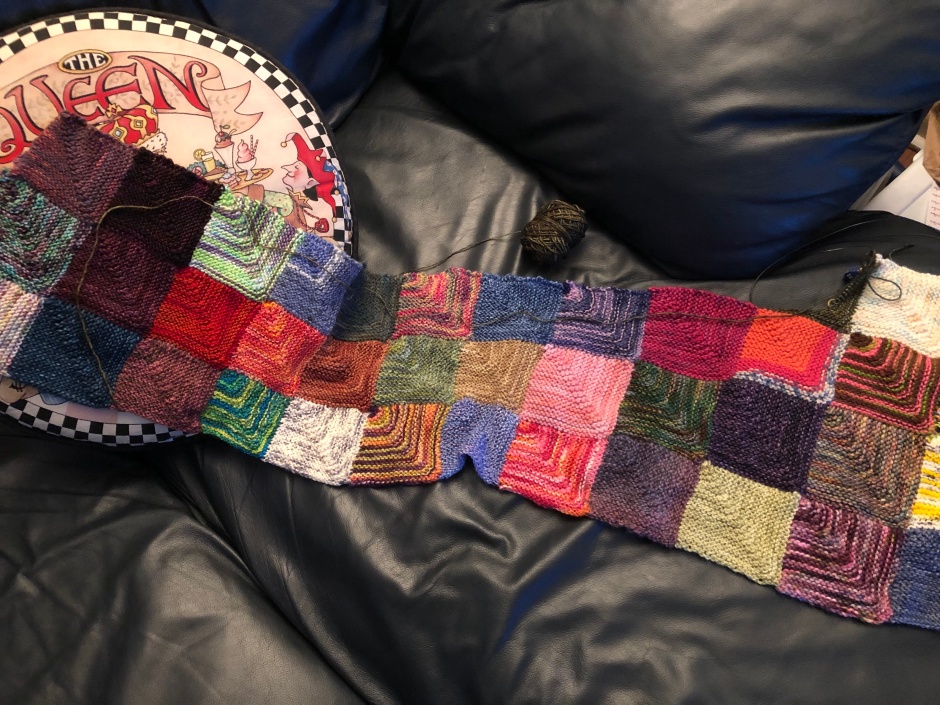 Sad but true, the Memory Blanket by Georgie Nicolson requested by The Prophet (20-something son) is the last project I performing any clicking of the needles on. Not sure why I’ve lost my knitting mojo…perhaps it might be because I’ve re-established a very close relationship with my spinning wheel (more about Levana on another day.

I cast on for The Prophet’s Memory Blanket in December of 2019, and have been using leftover yarn, mostly from my hand-knit sock projects. Some of the chosen yarn brands are the following: Madeline Tosh, Miss Babs, Malabrigo, Dashing Dachs, Woolen Rabbit, sunshine Yarns, Dream in Color, Scott’s Swag, Handmaiden, DogEared Dyeworks, Spunky Eclectic, Unique Sheep, Koigu, Briar Rose Fibers, Woolmeise, Sundara Yarn, Socks that Rock and Austerman. There are a couple of squares in which I’ve lost the yarn band or never added a note to the sandwich bag housing the leftover, so unfortunately a couple of unkowns.

At least, I graduated to the 4th row so I am up to square #38…but then again that is only 38 out of 144 as ultimately the blanket will be 12 squares by 12 squares. AND I will also add a border of some sort…lots more knitting to get this moved from WIP to FO status. It is a great pattern and easy to remember…basically potato-chip knitting if you know what I mean. I really need to balance out my knitting versus spinning. Any suggestions for getting back on track with my knitting?

Traditional gender stereotypes somehow missed our house in that I enjoy thrilling, scary, drama, blood and guts, violent movies and my husband…not so much. He prefers rom coms…hands down every day. So how do we handle television viewing? Compromise, with a happy medium, is the key. We meet in the middle with comedies. We’ve binged such titles as “Grace and Frankie,” “The Marvelous Mrs. Maisel,” “Community,” “Space Force,” “30 Rock,” “Working Moms,” to name a few. This past weekend we were flipping thru Netflix to see if something peaked our interest and lo and behold we discovered a surprising winner in “I’m Sorry.”

The two-season series (thankfully renewed for a third season) was a gem of a find. “I’m Sorry” is the semi-autobiographical brainchild of Andrea Savage, a comedic actress, writer and I believe stand-up comic as well. The series showcases her life with her lawyer husband, Mike, (Tom Everett Scott) and kindergarten-age daughter, Amelia. Her parents are a hoot and a holler played by Kathy Baker and Martin Mull. One of the first scenes hooking us in was actually within the opening credit when Andrea is driving and eating…what she’s eating out of the bowl we are still not totally sure. I think it is oatmeal but it could be some pasta, maybe?

We never watched a show where parents had to unexpectedly explain such heavy-duty topics to offspring so young. There’s racial diversity. There’s the mention of a euphemism for lady parts (“front tushy”), which prompts a discussion about where babies come from. And shortly on the heels of that fun topic: the difference between sex to procreate and sex for plain ole enjoyment. The language can be four-letter rated and raunchy but it flows and very much tied to the characters who utter the words. One of the funniest bits centers around the couple’s fascination with the Next Door app. We can totally relate. It seems like every day there’s a notification about a missing dog, buy or adopt a kitten, a break-in of a car left unlocked…you get the picture.

On a personal style level, I found Andrea Savage far ahead of the curve. The first season of the series was filmed sometime in 2017 to air in 2018 or there about. Throughout the 10 episodes in that season and bridging over into season 2, our funny mom is modelling, most days, a perfect front tuck, which is complimented with rolled/cuffed jeans and either short booties or white sneakers. As an aside, my husband doesn’t get this current front tuck trend and likes to utter some choice words about the ‘look.’ He actually had to eat some words because Andrea totally pulls it off.

For sure looking forward to seeing in the third season, where the Warren-Harris family takes us on their journey through life in LA.

Book Title: Of Literature and Lattes 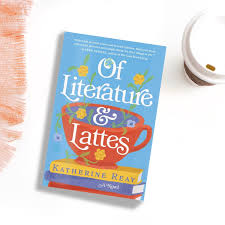 I’m beginning to think I should really make a note when I add a selection to “Want to Read” within Good Reads of how the book arrived on the list. I suspect “Of Literature and Lattes” was on a summer reading list…a light read. I heard about Katherine Reay’s other novel, “The Printed Letter Bookshop” set in Winsome, Illinois, but going against my usual penchant for reading in chronological order I picked up the latest first. END_OF_DOCUMENT_TOKEN_TO_BE_REPLACED

Do you find yourself foraging for sweet and sugary foods more than usual? Do you constantly want to eat? It seems like this is becoming the norm rather than an isolated incident for many during COVID-19. Yes, it is a stressful time we find ourselves living in. Many are eating more, and craving sugar 12 percent more due to elevated levels of cortisol, which unfortunately is brought on with stress.

END_OF_DOCUMENT_TOKEN_TO_BE_REPLACED

I confess: I subscribe and follow quite a number of beauty, style and fashionista YouTubers (Hot and Flashy, Stephanie Marie and Nikkia Joy). I gather and absorb their tips on makeup, clothes and gadgets they can’t live without. However, there’s one aspect about their lives I just don’t understand. On a monthly basis, how is it possible to film a video totally devoted to their empties?

END_OF_DOCUMENT_TOKEN_TO_BE_REPLACED

It is time to resurrect WIP it Wednesday. Well, not exactly a current WIP, as this project is a real deep dive into the vault of very sad and lingering pile of half-knits. In this case, even less than half as the heel flap is barely started on sock #1!